When you’re traveling abroad, you’ll want to stay connected with your world.

But it turns out that staying in touch with your folks back home is one of the most difficult tasks to pull off.

Well, because global roaming is difficult to manage.

So, long story short, you’ve got to manage global roaming—and that management should be done like a boss.

Now the million-dollar question that’s coming to your mind is, How’ll I manage this global roaming in the first place, huh?

That’s where a world travel SIM card steps in.

But since there are many universal SIM cards on the market these days, finding the best one is often easier said than done.

Well, so we’re bringing this set of features that every top global SIM solution should have.

Without any delay, let’s get down to the details.

The two things that every leading international SIM card should have

A good international SIM card should have two things. The first thing is about delivering world-class coverage. And the second one is related to affordability.

Both of these two things are important. There’s no two ways about it. Having just one out of the two will not do—come what may.

The answer is Pix World. 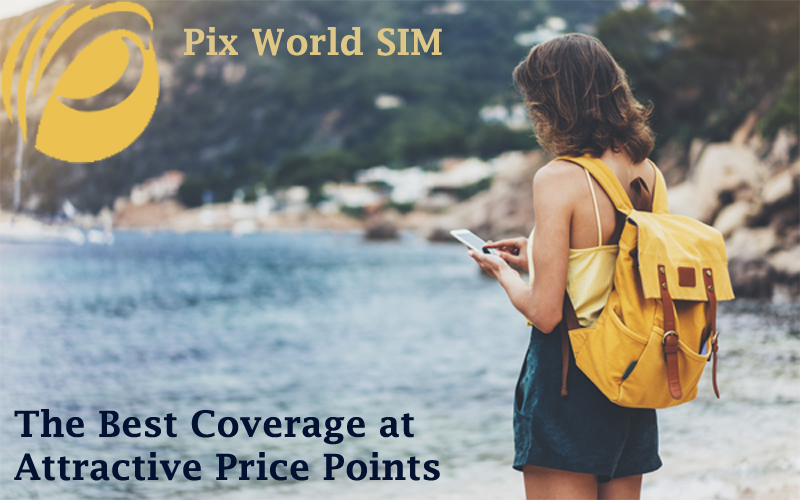 Okay, so Pix World delivers the ultimate coverage that money can buy right now. But the best part is that this expansive coverage comes at super pocket-friendly rates, to be precise.

First off, let’s discuss network coverage. So, how much expansive is Pix World’s network? Well, in simple words, when you insert an international prepaid SIM card from Pix World in your unlocked device, you’ll be covered—like, literally.

Pix World gives coverage in more than 193 countries and over 220 cruise ships. Now, the question comes, “How does the company deliver such an awesome coverage on both land and sea?”

And the answer lies in Pix World’s extensive network. Yes, this telecom company has a very strong and wide network that includes network operators that go north of 150. These operators work on high-speed 3G and 4G networks. So call drops and undelivered messages and patchy coverage are definitely a thing of the past when you’ve got a SIM card from Pix World.

By having such a wide network, Pix World provides sensational connectivity anytime, anyplace.

Now you know Pix World offers stellar coverage. But is it really affordable? Can it be owned by a globetrotter who’s traveling on a budget?

Well, yes. To begin with, Pix World has a range of wireless plans—and each of them is priced affordably.

In fact, if you stick to a wireless plan from Pix World, you’ll easily save more than 120 percent of your roaming cost. Now, that’s definitely a lot of saved money, you see.

Now, you know why it makes complete sense to go with Pix World if you’re traveling abroad. This is one of those rare international prepaid SIM cards that give you best-in-class coverage at affordable rates.

So, get your prepaid plan from Pix World. And then be ready to explore the world while never losing the touch with your folks.