When you’re buying an international SIM card, you need a solution that’ll help you remain in touch with your folks every time.

Most of the world SIM cards deliver decent network connectivity, but they don’t do that every time and everywhere. So, the deal is pretty simple—you need a solution that’ll not just deliver the best coverage, but it’ll deliver that sort of connectivity consistently. Yes, as someone rightly said, consistency is the only currency.

So, all in all, you’ll need a world SIM card that’ll let you deliver the best global coverage every time. And finding such a SIM card is no walk in the park, not by a long chalk.

Because there are so many international global SIM solutions available on the market that you’ll get confused for sure.

That’s why we’re here with the name of the ultimate international SIM card that’ll let you achieve wireless freedom consistently and at attractive price tags.

The name is Pix World.

Pix World—connectivity and affordability packed in a single SIM 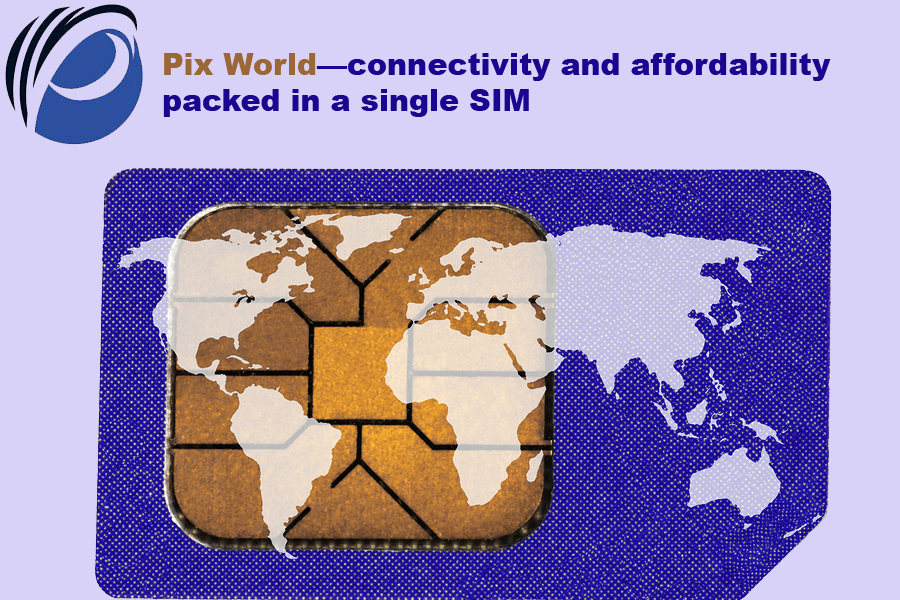 Pix World is the best global SIM solution for your money. Why? Because it packs connectivity and affordability.

You may have seen international SIM cards that deliver either connectivity or affordability—but Pix World is different as it’s giving its users the best of both worlds.

Let’s start with connectivity first. Then, we’ll head toward affordability.

So, Pix World makes sure you’re connected with your folks back home no matter where you’re traveling. It’s as simple as that.

For delivering the best-in-class network coverage, Pix World has built a super-strong network. This network includes more than 150 telecom operators that work on super-speedy 3G and 4G networks.

Because of this network alone, Pix World lets its users experience flawless coverage all the time. And just by having this network in your corner, you can expect to stay connected in more than 193 countries and over 220 cruise ships.

That’s what worldwide coverage should look like—in every sense of the word.

Any wireless plan that isn’t affordable isn’t experienced by a lot of travelers. And Pix World doesn’t want that to happen to the wireless freedom it has built. After all, Pix World has worked really hard to create a super-extensive network of telecom operators.

Now, if Pix World charges a lot for letting users access this network, then nobody will truly enjoy flawless connectivity. Because the network won’t have any takers in the first place.

That’s basically why Pix World makes sure that its network is enjoyed by every international traveler. For that reason, Pix World has introduced a range of affordable wireless plans. And since there are so many wireless plans available with Pix World, there’s something that fits everyone’s needs properly.

As a matter of fact, if you get a plan from Pix World, you’ll easily save more than 120 percent of the roaming cost.

Now, that’s definitely a lot of saved money that you can use elsewhere during or after the trip.

So, now, you know the reasons why Pix World is the best prepaid world SIM card available. Pix World does two things really well—it delivers true wireless coverage, and it brings that at attractive price points. So, let Pix World manage global roaming for you whenever you travel abroad for work or pleasure.

However, before you pick a plan from this telecom operator, make sure you’ve browsed through its entire range of offerings. This way, you’ll find the one that suits your needs really well.