Pix World is one of the leading world SIM card providers on the planet today.

But how has it become the best in business in the first place?

Well, it’s all about hard work, dedication, and consistency, to be precise.

Pix World is one of the best World Travel SIM Cards that money can buy right now. And that’s because this telecom company offers the ultimate coverage at rates that aren’t eye-popping.

Now, let’s take a deep dive on the reasons why Pix World is the real deal. 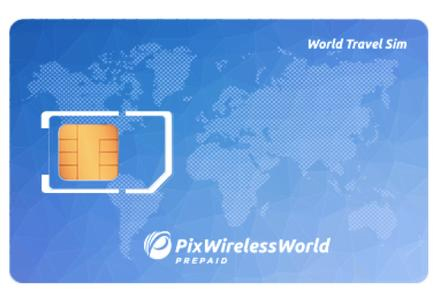 Pix World is a robust telecom service provider that offers class-leading network. This awesome network is made possible because it consists of 150 telecom operators. What else? Each of them is operating on 3G and 4G networks. So, in a way, when you’re connected to Pix World, you’ll be hooked to any of these operators.

And that’s eventually how Pix World has managed to deliver awesome coverage in more than 193 countries and over 220 cruise ships.

This way, when you’re connected with Pix World, you just can’t imagine facing any call drops or undelivered messages ever.

Now that you know about connectivity, let’s discuss affordability.

It’s often seen that anything that’s good comes at a super-high price tag.

So, you’ll assume that Pix World’s SIM plans will also cost you a lot.

That, however, is completely untrue.

Instead, Pix World offers a suite of wireless plans that’ll easily let you save more than 120 percent of roaming charges. Well, that’s definitely a lot of saved money that you can use elsewhere.

Summing it all up

So, in the end, it’s completely justified to state that whenever you’re traveling abroad, you know why Pix World is the real deal. Just in case you’ve got any doubts regarding Pix World’s wireless plans, get in touch with the company’s sales team right away.